Teamfight Tactics’ beta is over and the elements are rising in season two. As our first new set, Rise of the Elements fully replaces the champions, origins, and classes you played with during beta.

Here you will find all the information you need to hop into the Convergence and start exploring the new set. TFT has evolved, but your goal’s the same—can you adapt to new strategies, abilities, effects, and interactions to build a team and defeat your opponents?

Get ready for Teamfight Tactics: Rise of the Elements, coming in patch 9.22!

This season champions represent elements rather than origins, but the rules are the same. Deploy multiple unique champions with the same element to unlock powerful trait bonuses! Copies of the same champion all benefit from their elemental bonus, but only the first counts for determining how many unique champions you have deployed, even if your copies are different star levels.

Each element has its own unique bonus:

A champion’s class describes how they fight and functions similarly to their element, conferring additional trait bonuses based on how many unique members of that class you have on your team (duplicate champions don’t count here, either):

Assassins sneak across the battlefield at the start of combat, placing themselves opposite from where they started. 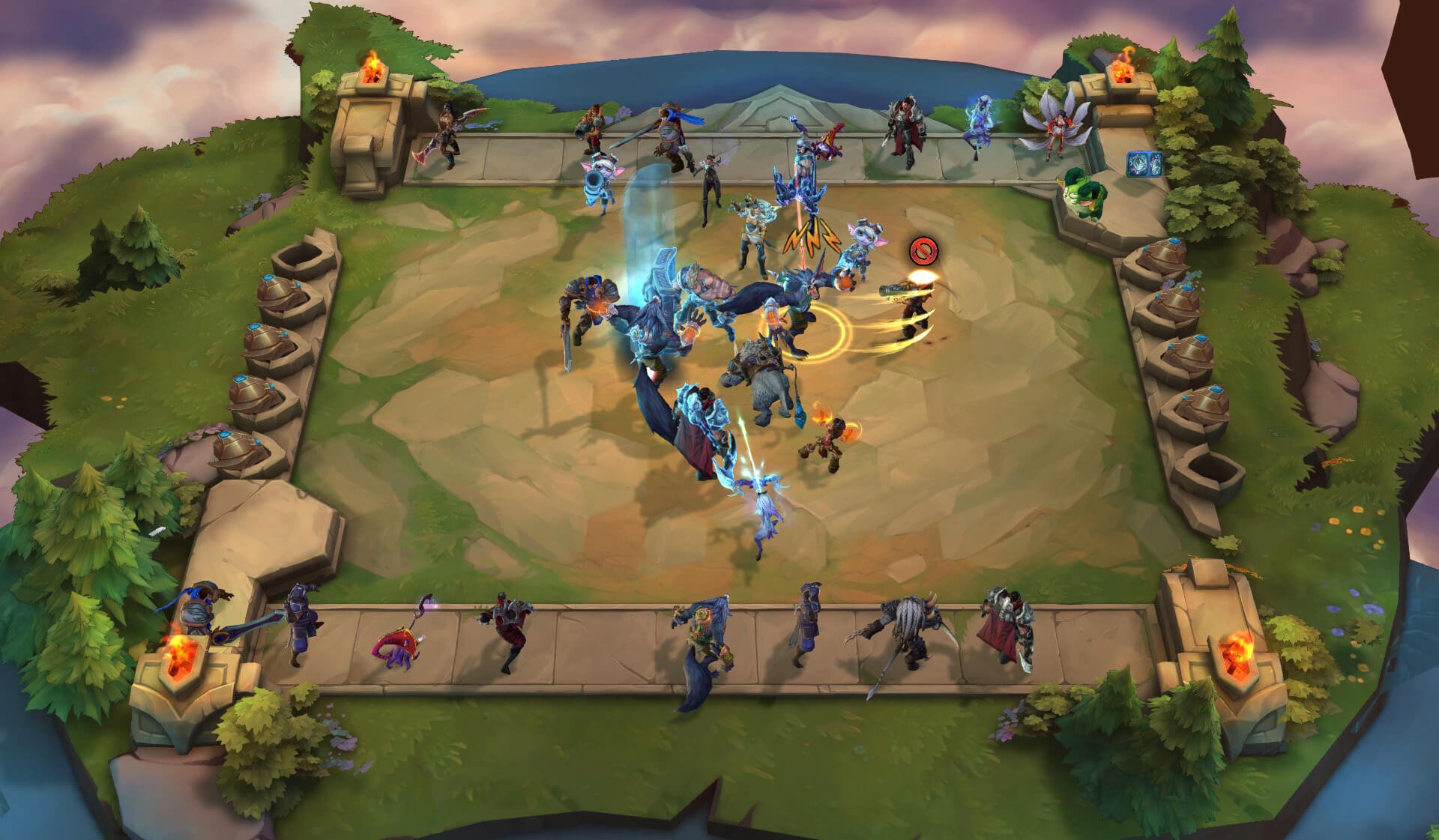 Items increase your champions’ base stats and can upgrade into stronger items that provide unique effects. In PvE rounds, each monster you defeat has a chance of dropping an item. In Draft rounds, every draftable champion comes with an item equipped. You’ll always see basic items early on, but as the game progresses, you’ll have a shot at upgraded items.

There are nine basic items:

Equip items by dragging and dropping them onto your champions (be careful, this can’t be undone). If you equip a champion with two basic items, those items automatically combine into an upgraded item, sharing the same combination of stats as its components. Every pair of basic items creates a different upgraded item!

Upgraded items can buff your attacks and abilities, grant unique effects, and even change the properties of your champions! New classes and origins means new spatula items, here’s what’s new:

Element of the Game

Each Rise of the Elements game will randomly feature one element: Inferno, Ocean, Mountain, or Wind. The element of the game can be tracked in the center of the carousel, and has a few effects.

When you load into the Convergence, one random hex will be imbued with the element of the game, buffing the champion that starts combat on top of it each round. When the game reaches stage 3-1, a second Elemental Hex is created. The same hexes are chosen on all eight players’ boards.

Note that Elemental Hex buffs take up an item slot. If a champion with three items starts combat in an Elemental Hex, they won’t receive the buff.

The importance of items in Teamfight Tactics is by far the biggest difference compared to other games in the auto-battler genre. With this importance, however, the game becomes a lot more complicated to players trying out the game. Here are the basics you need to know about items when playing Teamfight Tactics.

The final base item in Teamfight Tactics is the Spatula. The spatula has no effect of its own, to compensate for the strength of its combination items. It is by far the most flexible item you can obtain. This causes it to often be regarded as the best starting item you can receive.

By far the easiest way to learn the way certain items are created, and what the items you have can build into is through using a cheatsheet as seen above. This image is created by https://progameguides.com/ . Each combination item receives the stats of the items used to create it, on top of the additional effect of each item.

Do note, that items created with the Spatula item gain twice the stats of the item the spatula is combined with. With the exception of the Force of Nature item, which has no stats. However, this item does allow one additional unit to be played on the board and is made by combining two Spatulae.

The Most Effective Items

While each item in Teamfight Tactics can situationally be useful, there are certain items you should aim to create, and some you should avoid. Among the most used items are the Guardian Angel, made by combining the B.F. Sword with a chain vest, giving a unit the ability to revive with 500 health. This item is one of the most powerful in the entire game as certain champions’ abilities may deal damage while the revival is ongoing. The most common examples of this are Kennen, Garen, and Swain.

Another item you are almost guaranteed to see in every game you play is the Morellonomicon. Morellonomicon is made by combining a Giants belt with the Needlessly Large Rod. The strength of Morellonomicon comes in through its ability to stop any unit damaged by (most) any ability of its wearer from healing. Certain champions that empower their basic attacks, such as Draven or Jinx, do not apply the effect of Morellonomicon through their ability usage.

Besides this anti-healing effect, Morellonomicon also deals damage to units hit by the ability of the wearer for 20% of the units max health over a period of 10 seconds. This effect of 2% of the health of the unit per second can be applied multiple times by the abilities of certain champions. Any champion of which the ability deals damage over time or in multiple stages can apply this effect multiple times. Examples of this range from the obvious, Garen and Miss Fortune and Swain, to the less obvious, a champion such as Brand or Anivia.

The other anti-healing item is the Red Buff. Build from a Giants belt and a Chain Vest. Red buff is the auto-attack version of the Morellonomicon and is most effective on champions of the Gunslinger Trait. As of now, Red Buff has the same 2% damage per second that Morellonomicon offers. However, there are plans to change the effect of both Red Buff and Morellonomicon in the near future.

Items Not Worth Building

Now that we covered some of the effective items you can build, here are some you should avoid for now. Sword of the Divine, an item made from two of the strongest base-items in the game, the B.F. Sword and a Recurve Bow. While the Sword of the Divine is not a bad item, the parts are just greater than the whole. Both of these tools can be made into much more effective items at the current point in time.

Another is Locket of the Iron Solari. The item is made through a Chain Vest and a Needlessly Large Rod. While at one point, this item was the absolute best in the game, it simply is past its prime. With the nerfs to the overall strength of the item and the introduction of the Hextech Trait there are simply better ways to use these base items. The Hextech Trait, which disables items at the start of the round of a random unit holding an item. This trait hurts items such as the Locket of the Iron Solari and Zeke’s Herald, which encourage grouping your strong champions together.

First Item Priority at the Carousel

The first item at the carousel has been an incredibly controversial topic. Which items you prioritize is something that differs, even among the most successful players in the game. The strategy I found most successful prioritizes the Spatula over everything. As I mentioned earlier, the sheer flexibility of this item, to me, has to make it the best item to start out the game with. Especially now that many strategies revolve around losing the early rounds of Teamfight Tactics.

That is all for this guide to the basics of Teamfight Tactics’ item system. As this only covers the start of the Item’s in Teamfight Tactics, we will be back soon with more in-depth information covering other aspects surrounding Items and how they can dictate which comps you are able to play. If you are interested in learning more about Teamfight Tactics, consider signing up for a Teamfight Tactics lesson with me through Gamer Sensei at
https://www.gamersensei.com/senseis/tsukaitft !