The 2017 release of Premiere Pro CC (April 2017) comes with a host of exciting new features.

With this release, you can create graphic objects and titles effortlessly directly on your video using the new Titler built on the same text engine as Photoshop and Illustrator. You can also share Motion Graphics templates through CC libraries integration, which helps you change variables such as text, color, size, layout, or mood of the motion graphic without changing the overall aesthetic. It's easy to obtain professional quality results with no audio expertise when you are editing audio in Premiere Pro. Publish to Stock effortlessly and start contributing to Adobe Stock and reach millions of creative buyers by using the new direct publishing option available in Premiere Pro and Adobe Media Encoder.

This release also includes a host of other exciting features including:

New in this release of Premiere Pro CC (April 2017)

Click Get started to view a custom Media Browser experience that allows for simple and fast selection of multiple clips and imports them into Premiere Pro. Once you select some media and press the Add button, a new project is opened with your clips in the Project panel. A sequence also gets automatically created from the selected media, in the order that the clips were selected. You can now get started quickly with a new project, play back a sequence in the Timeline and start editing.

The new Welcome Screen opens for users who are using the trial version, during every launch. Adobe Premiere Pro CC subscribers see this Welcome screen once during the first launch.

Using Premiere Pro, you can easily create graphic objects and titles on your video and create Shape Layers using the new Rectangle, Oval and free-form drawing tools, and use Text Layers to produce great looking titles, lower thirds, captions, and other artwork for your video production. You can also add images or video in Clip Layers to complete the graphic. Easily rearrange and adjust layers and their properties right inside the Essential Graphics Panel, and use familiar controls with the Effects Control Panel for motion and effects to create stunning motion graphics.

The new Title tool in Premiere Pro is based on the Adobe framework for working with text and graphics familiar from Photoshop and After Effects. The new Title tool offers a simple and intuitive way of adding text directly on the Program monitor. It’s fast and easy to change size and position of your title, change color and font type, or use different alignment options.

Titles and Graphics created in the Program monitor are automatically added to your sequence, saving you time and adding flexibility to the creative process.

All controls for the new Title tool can be found in the new Essential Graphics Panel, part of the new Graphics Workspace. 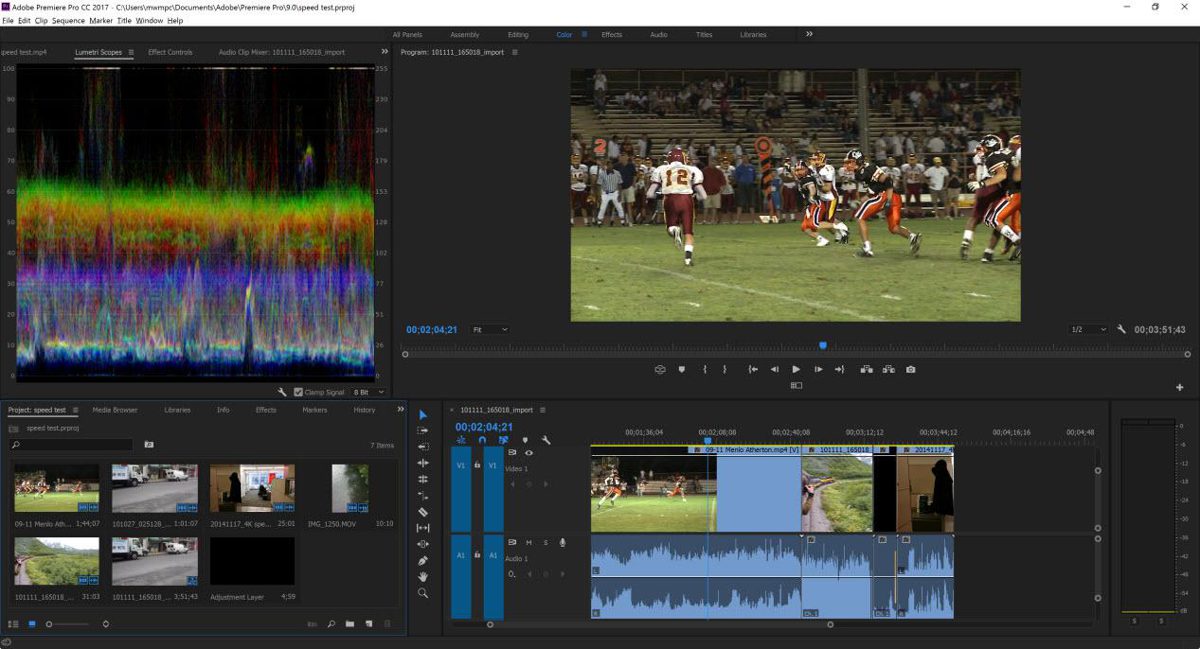 Typically, motion graphics specialists create templates in After Effects which are used by editors in Premiere Pro. Video editors often don’t have the bandwidth or expertise to create dynamic, professional graphics, or graphics packages such as titles, lower 3rds, bumpers, and closing credits. However, they want the ability to change core properties quickly and efficiently within the graphics throughout a given project.

Premiere Pro allows editors working with Motion Graphics templates created in After Effects to change some variables (dictated by the After Effects artist) such as text, color, size, layout, or mood of the motion graphic without changing the overall aesthetic. Editors and motion graphics artists can easily share Motion Graphics templates through CC libraries integration.

With shorter turnaround times and shrinking budgets, many video editors mix their audio without engaging a professional audio engineer. The Essential Sound panel in this release of Premiere Pro empowers video editors to easily handle mixing techniques for their projects without the need for audio expertise. The Essential Sound panel can be found as part of the Audio workspace inside Premiere Pro. Using this panel, you can easily designate whether an audio clip is music, effects, dialogue, or ambience and choose are given straight forward audio parameters, appropriate to the selection made, so you can achieve optimal sound quickly.

You can contribute your creative assets to Adobe Stock through a destination publishing workflow that is built inside Premiere Pro and Adobe Media Encoder. This gives you the opportunity to effortlessly reach millions of creative buyers and also receive best-in-class royalties for your work. Sharing your projects via Destination Publishing allows you to render and share videos to popular web locations from directly within Premiere Pro and Adobe Media Encoder CC.

You can send any audio effects and keyframes used in Premiere Pro to Audition without any rendering. Premiere Pro supports more sequence components and settings that were not transferrable before. Some of the new effects that are now available in Premiere Pro include:

As part of this release, there are also several other audio effects that have been updated to include real-time spectrum displays and gain meters and look futuristic. Editors working with audio effects have a wider range to choose from and can see that their audio effects and keyframes added in Premiere Pro transfer over to Audition without the need for rendering.

To learn more, see Audio effects and transitions list and Overview of audio and the Audio Track Mixer.

With this release, you can output ambisonic audio for VR enabled platforms such as YouTube and Facebook. You can also calibrate audio as per your orientation and position. Much like VR video in Premiere Pro, the audio is an explorable 360 representation, which is linked to the video. Expanding on the foundational VR workflow components Premiere Pro now offers Ambisonic audio to take the VR experience to the next level with positionally aware audio represented within the spherical video.

Adobe Premiere Pro comes with an array of support toward a wide variety of new and latest file formats.