Designing Cartoon Characters in Adobe Animate: The field of animation is sometimes misunderstood without cartooning. Cartooning merely sketches caricatures of characters with some distinct subtleties to make the character evoke as a sense of comedy. On the other take, animation is the art of bringing life into the characters. The animation is the art with which inanimate pictures are brought to life with the help of various modern computer-based sequencing techniques.

Use Adobe Animate to create vector animations. Create composites, motion graphics, and visual effects with Adobe After Effects. And move seamlessly between them and other Adobe apps, including Photoshop and Illustrator. Whether you’re using Windows or Mac OS, the right drawing tools and animation software awaits.

Get to Know More about other types of Course Details in Stream wise, and Category wise

About Whom the Cartoon Character Animated for?

Cartoon character is a way to express the person’s personality and work in the cartoon’s form to illustrate among the people. Character Animator is the person who wants to invent a character and make it come alive! It helps you provide a figure and create puppets by changing built-in character templates by importing your Photoshop and Illustrator styles. Character Animators can be from aspiring to professional animators, gamers, video content creators, graphic designers, or the person who works in the media and entertainment industry and require animation as a part of their overall workflow. This software also allows you to host live interaction between characters and fans.

You can also develop a puppet with your own art by importing a multi-layered Photoshop or Illustrator file. Character Animator can bring multi-layered Photoshop and Illustrator files representing the structural pieces of a character. The chosen file is introduced, and a puppet or a figure appears in the Rig panel. The animation structure in the Photoshop or Illustrator document determines the structure of the creature. Note that it is vital that the puppet is made according to the standards required for rigging it.

Beginner designers and animators are looking to design cartoon characters that can be turned around for rigging and animating in Adobe Animate.

Take animation courses or a degree program. And learn these things:

Character Animator just allows you to import artwork from Adobe Photoshop or Adobe Illustrator, and bring life into them. You do that by first capturing your performance using a microphone, keyboard, camera, mouse, or touch screen. While you are using, Character Animator captures your facial expressions.

There are not any specific courses for cartoon character animation, you can either opt online certificate program, or you can do it, bachelor, in Animation.

For an online certificate program, you can take admission after ten or 10+2 standard as your wish, it comprises of video lectures, training, testing and provides a certificate. Its cost ranges from 3k to 15k.

Animated adobe has animated a lot of vector-based tools, which can be useful for designing anything in the course. We will be using them to construct a full character that you can then take if you wish to an animation and rigging stage so we can layer parent and get it all ready for animation using this design that I have laid down. And in this course, you will learn about the tools but also the importance of layer hierarchy and why you want to layout layers a certain way, especially if you plan to go to the next step with rigging and animating. So more specifically, in this course, you will get a good overview of the design tool inside the Adobe.

From there will jump over and begin the process by outlining our character using a line tool, a pen tool, and others. Once we have an outline set and you’ll learn all about how to create nice smooth lines during this, we will move over and fill the character using the paint bucket tool. You will learn about the quirks of the paint bucket tool as we as different options you can enable and disable to get the fill that you are looking for. And then we will move over and tackle shading and highlighting we can establish a light source and then a light source within the scene, and we will move over and tackle masking, and we will start with the eyes.

We can lay down the eyeball to the mask’s boundary with the eyeball and then move over creates lids. So that way, they are self-contained within the edge of the cover as well as the pupil. The eyeball and they will tackle the mouth in a similar fashion and shape phonemes with that time that we create for a mouth. We will move over, organize our layers, and do any polishing that is needed for the character. Once we are done well, export an image so that you can share this with the world if you wish, and then we will wrap up from here.

If you are a complete beginner, don’t worry – all of these programs come with tons of online tutorials to start with! 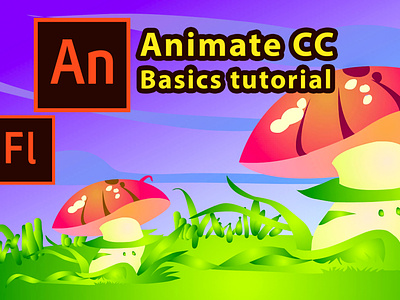 Knowing with Adobe Animate is recommended but not a necessity as special subjects that are required to be studied at this level. But aptitude in drawing, sketching, and a deep interest in computers is always considered essential to gain entry into the animation industry.

It would be very right to study fine arts at the college level, and a Bachelor in Fine Arts is a correct way to give a career in animation a big push.

Learn how to use Animate’s vector-based software to design and fill your character while applying proper layer hierarchy. This character blueprint can then be taken further for rigging and animation if you desire. The following topics we will cover include:

You can export directly to a PNG sequence Adobe Media Encoder and WAV file. The exported movie file can be played back immediately.

Given below are the different top/important roles of professionals in the cartoon animation industry:

The animation is a satisfying and prospective profession and is attracting youngsters towards itself. Beginners in this industry generally work in the capacity of junior animators in production houses and animation studios. The starting package of these animators can be in a bracket of Rs. 10,000 to Rs.15000, but within a time of three to five years, one can become a senior animator and make a healthy salary as much as Rs.30,000 to Rs.40,000 per month. If you innovate antique pieces, then the prize money may be beyond your expectation.

Given below is the list of few companies in the field of Animation:

Question 1.
What is Animation?

Answer:
The animation is a method of photographing successive, drawing, Modelling, puppets to create an illusion of ethe art of bringing life into these characters.

Answer:
Yes, Adobe Animate is a powerful tool for creating vector graphics. It is a great place to start learning 2D digital animation. Like its predecessor, Adobe Animate was designed for ease-of-use.

Question 3.
Which program is best for Animation?

Answer:
Use After Effects program in Adobe Animate to create vector animations, Create composites, motion graphics, and visual effects are the best program for you.

Question 4.
How do I make cartoons in Adobe Animation?

Answer:
I make or design cartoon in Adobe Animation by following steps:

You should have flair and excellent visualization skills for using colors. Patience, perseverance, and dedication towards your work are also a must for this job profile. The animation is a multitasking job, so you need to work as a team. Therefore, you need to have above-average communication skills and leadership skills. So if you have the above talent and a keen interest to explore this creative art, this is the career for you.